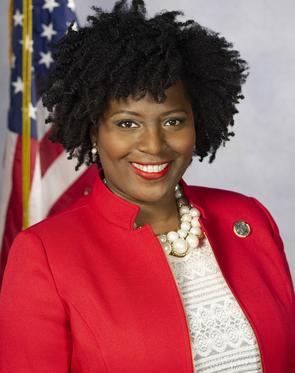 State Representative Joanna McClinton
Joanna McClinton, Esquire, took the oath of office to serve the people of the 191st Legislative District on Aug. 25, 2015. In Nov. 2018, she became the first African-American and woman to be elected as the House Democratic Caucus chair for the 2019-20 legislative session.

Representative McClinton studied Political Science and Leadership in Global Understanding at La Salle University. Immediately after graduating from LaSalle, she enrolled at Villanova University School of Law where she used her legal training to serve the public. A lifelong resident of southwest Philadelphia, Rep. McClinton has been acknowledged for her commitment to public service and enhancing the quality of life for residents in Philadelphia and Delaware Counties by receiving several awards.